To better understand the need for implementing an improved React Native architecture, let’s briefly focus on the current one. 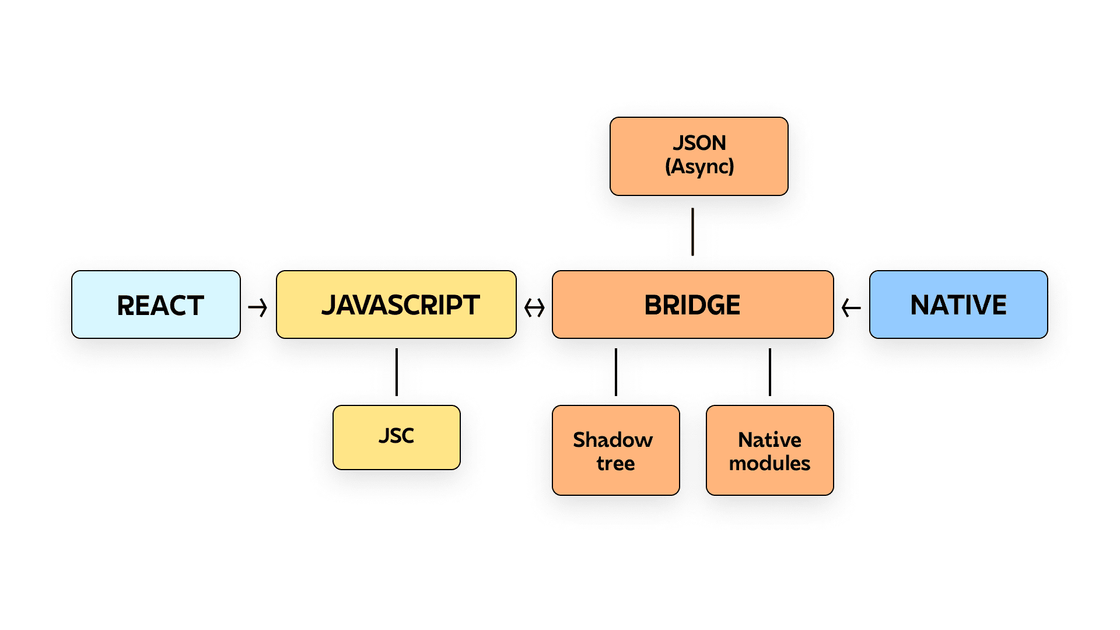 React Native is single-threaded, which means when one component is rendering, others have to wait in line. This can cause significant performance issues. Paired with that, the obvious thing that presents itself as a problem is the fact that at this moment everything in React Native is done asynchronously.
In contrast to that, native apps written in platform-specific languages perform all their operations synchronously, which has proven to benefit the app performance and undeniably makes the apps run much smoother.

Downsides of the current architecture

Despite the ever growing React Native community and the fact that it’s being used in many powerful apps, there are still many faults in the current architecture which could greatly use restructuring.

With the new React Native architecture being closer than ever to becoming publicly available, more and more details are coming to light. Essentially, the aim of this new long-awaited architecture is to improve performance and make it closer to the native apps along with helping the React Native framework integrate with Javascript-based hybrid frameworks.

The new structure differs from the current one in more ways than one, as can be seen below. 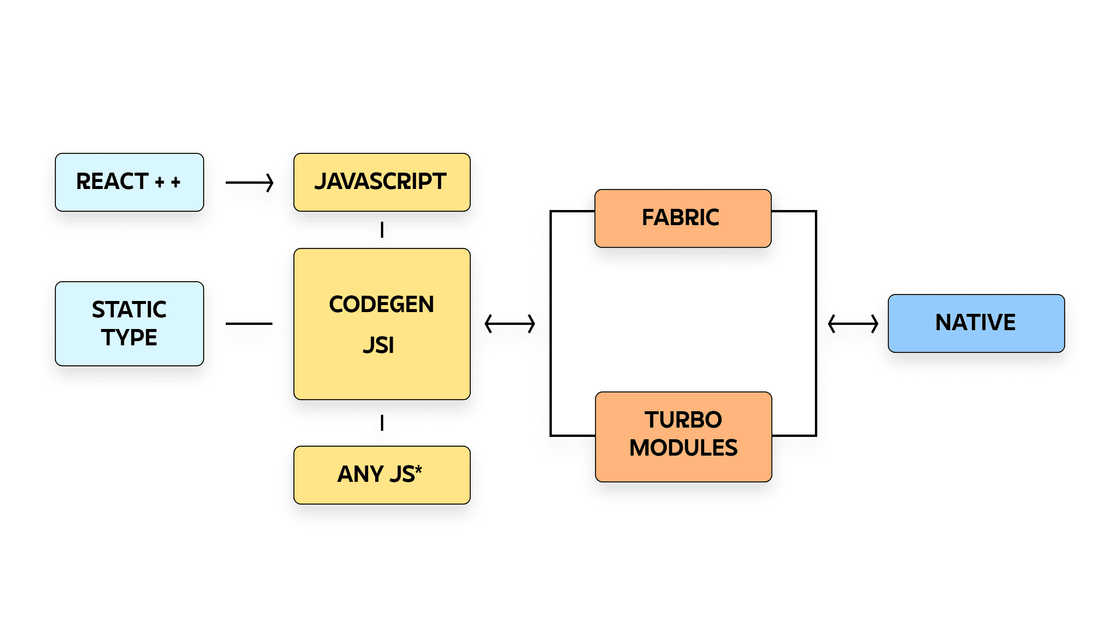 Where is the Bridge?

The first glance at the new architecture gives us the question about what happened to the Bridge.
One of the new architecture’s main goals is to gradually get rid of the Bridge and replace it with the new component called the Javascript Interface (JSI).
Since the Bridge brings unnecessary problems such as uncertainty whether the data was sent and/or significant delays, it is not confusing why the new React Native is completely getting rid of the Bridge.

Seeing terms like Fabric, Codegen, JSI and Turbomodules brings forward many questions about this new structure. Let’s explain them one by one.

React Native JSI or Javascript interface is the layer that is going to completely replace the Bridge. The main purpose is to make the Javascript and Native sides aware of each other and able to communicate without the extra step that is the Bridge.
One change brought on by JSI is the fact that the JS bundle no longer needs to depend on JSC (Javascript Core). This means that in the future the JSC engine can be replaced with another Javascript engine, such as Chrome Engine V8.
Furthermore, by using JSI, Javascript will be able to hold references to C++ Host objects and invoke methods on them, consequently enabling the Javascript and Native components to recognize and communicate with each other directly.

The entire new React Native architecture is often wrongly called by the name Fabric. In reality, Fabric represents only one part of the whole structure, more specifically the UI layer.

First of all, Fabric allows creating the Shadow tree directly in C++ with the help of UIManager, thus improving UI responsiveness by eliminating the need to jump across threads.
Furthermore, instead of communicating the Javascript side by the Bridge, Fabric uses the JSI to expose the UI functions to the Javascript side resulting in direct communication from both sides. This control allows the Javascript side to have priority queues for the UI side, meaning it can prioritize time-sensitive UI tasks and execute them synchronously before all others.

Turbomodules are basically the old Native modules, but implemented and behaving differently.
The best thing about Turbomodules is that they’re lazy loaded, meaning the Javascript code is going to load each module only when it’s needed and hold a direct reference to it. This can significantly improve startup time for apps with lots of Native modules.

Another useful tool in the new React architecture is Codegen. This tool will automate the compatibility between the Javascript thread and the Native thread and ensure they’re synchronized. It is going to generate more native code at build time, instead of run time.

Codegen will define interface elements used by Turbomodules and Fabric. All of this is expected to remove the necessity to duplicate code and enable sending data without uncertainty and much faster because there is no need to validate the data every time.

Another aspect of the React Native re-architecture is Lean Core. It is fundamentally a React Native repository change already in progress. The goal is to reduce the weight of the generated app and make the library lighter. It is also supposed to help the community resolve pull requests faster.

How long until it’s open source?

After being announced in 2018, there have been many speculations about when the new React Native architecture is going to be finished and ready. Some have even wrongly speculated the dates and expected it to see the light of day last year or even the year before that.
What we can say for sure is that the new architecture is now closer than ever, seeing as the new Fabric renderer, along with other components implemented in the new architecture, is already used in the Facebook app on more than 1K screens which use React Native (see the official tweet from the React Native team)
In the relatively near future it is going to be available to everyone as open source software, seeing as it’s currently being documented for easier use.

After analyzing all of the features of the new React Native architecture mentioned in this post, all we can say is that this new structure is definitely going to give React Native some powerful improvements.
We can’t wait to see how it all works out and to try it ourselves!

Follow the latest updates from the React Native team